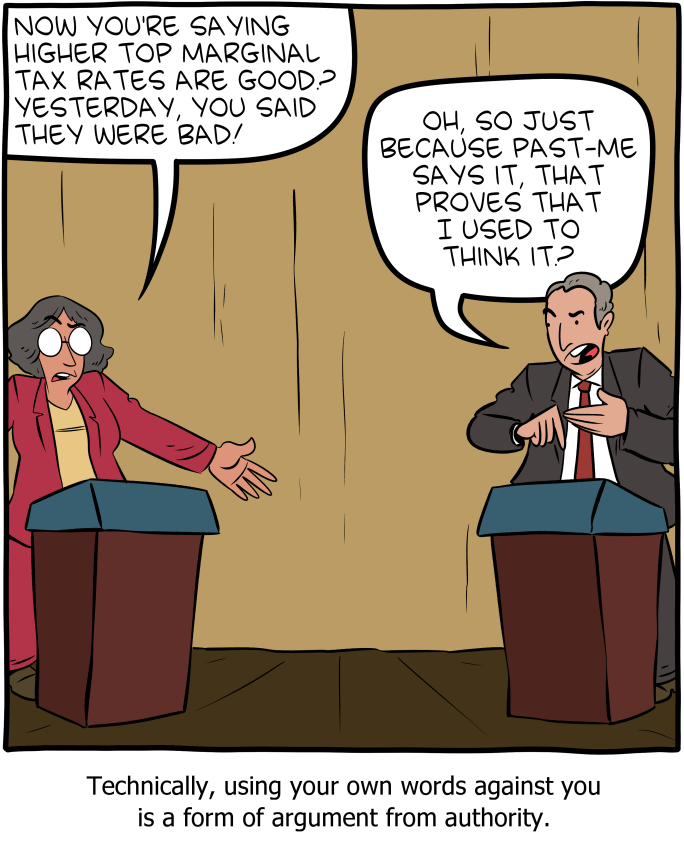 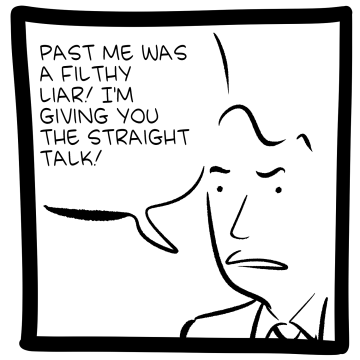 Oh so suddenly I'm an expert on whatever I think?
Top

Using your own words against you is a form of argument from authority only if you say that the statement is true because an authority says it. That is to say, "Dave would know best what Dave was thinking about yesterday, so if Dave says that yesterday he thought higher marginal tax rates were better, it must be true."

We don't have to devolve into ridiculousness to imagine a scenario where, in fact, Dave's expertise on his own thinking gives us a wrong conclusion - Dave could be lying about his thoughts, or Dave could be a psychologically disturbed individual who doesn't really know what he's thinking all the time. Or perhaps Dave doesn't remember what he thought yesterday.

More importantly, using someone's words against them, in certain contexts may considered a form of Ad Hominem, which is a fallacious* argumentative strategy wherein the arguer, rather than the argument is targeted. In this case, we would look to see if there is a specific Tu Quoque fallacy at play; ex. "You say higher marginal tax rates are better, but you yourself are benefiting from the current, lower tax rate." Sure, maybe he's benefiting, but it doesn't negate his argument. On the other hand, the way it is currently formulated is more of a red herring - what he argued yesterday doesn't necessarily have bearing on the truth of his argument today.
https://www.amazon.com/s?i=digital-text ... r_ebooks_1

It's not necessarily a fallacy in a political debate, where the ultimate issue is "should you vote for me or that other guy". Voters might doubt a candidate's commitment to a position if it represents a sudden turnaround from what they've advocated before.
Top
Post Reply
3 posts • Page 1 of 1