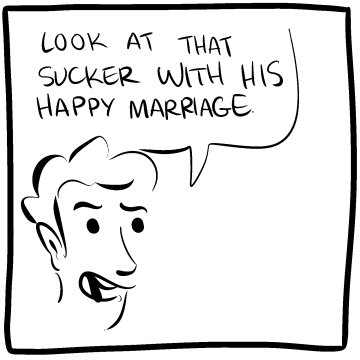 Go read Stuff Sucks. It's a little hipper than the stuff I usually read, but it's not bad, and the art is HOT.

Also, soon all the Movies will no longer require the use of Bit Torrent. The Brushing Teeth video as already available for your easy downloading pleasure.

Does anyone else think there needs to be a new webcomics news source? I mean, as far as I can tell, the only webcomics press is Comixpedia. Although I read it every day, I find it kind of frustrating. It's more like a communal blog of webcomic fans than a real news source. How is it that this is a news item, and yet there's no big article on the recent issues at KeenSpot?

I know they had articles on the various comics that left, as well as an article on the launch of Blank Label. But, where was the article about Kurtz's involvement? It's no secret - he wrote about it on his front page. This is about as dramatic as the webcomics world gets, and there's no real coverage. Everyone is acting like it's all completely civil, but based on the past between PvP and KeenSpot, does anyone really believe that?

Furthermore, wouldn't anyone else like to see some investigative journalism? Most of the news from ComixPedia, and the sadly deceased Buzz Bugle is passive. Why not have real reporters who talk to people over email at least, and maybe even harangue them at conventions?

I don't want to sound like I don't appreciate ComixPedia. They do a great job, especially considering that none of them are paid to do what they do. Believe me, I understand how hard it is to run a website while having a job. Still, I think the webcomics community could benefit from more in-depth press, and perhaps competition between different news sources.

What do YOU think?

SMBC got it's first ad purchaser in Scribs!. Their ad will be going up tomorrow.