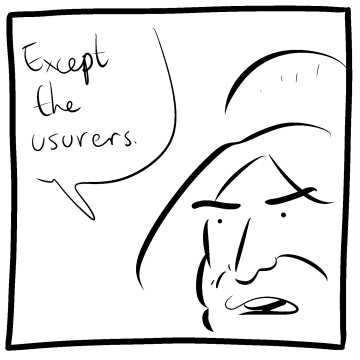 Sorry for the somewhat late update, however there is a brand spankin' new Chason page today.

Zach Your Own Adventure is going well. I'll be adding a little donatey bar shortly so you guys can mark your progress. Any contribution, even a very small amount, helps keep me drawing comics of the unimitably high level of stupidity you've come to expect.

Also, go check out Homerun Garden. It's a really cool concept for webcomics.

Spurious rumors of my intra-webcomics galivantations notwithstanding, I have thusfar refrained from exploiting my own palpable romantic prowess for personal gain. The time for change is upon us.

And so I give you "Zach Your Own Adventure."

"Zach Your Own Adventure" is something of an experiment in webcomics donation systems. The idea is relatively simple - each week (or perhaps two weeks depending on how well this goes), I present you a panel involving me just prior to some important occurrence. You then get ten options as to what I do, each with a dollar value. Predictably for SMBC lovers, the higher the dollar amount, the more heinous the act. At the end of the week, the amount of donations received will be tallied and referenced against the ten options. To put it simply - the more money raised, the more awful the thing cartoon Zach does.

Once the option is determined, I will provide a short comic illustrating precisely what happens. Then, you will be provided with a new panel and a new set of ten options.

In all seriousness, as you guys know, I'm currently trying to sustain myself on cartoons. I don't yet have any merch set up, but neither did I want to just ask for donations. I'm not asking for a huge amount - hell, I'm not really asking for anything. If you want to play the game, you can give as much or as little as you like. If you choose not to donate, you're still perfectly welcome to browse the comics and their results. Nobody's gonna judge you (I mean, what's the point in even considering you, you worthless piece of human garbage).

There are enough readers of the site so that even if just 5% of you gave just one dollar, you could easily have Zach performing the most awful task each and every week. So, not only do you get to see something gratifying to your Id, but you get to help a starving cartoonist (who now draws FOUR COMICS) with another month worth of lentils, plain white rice, and day old pastry.