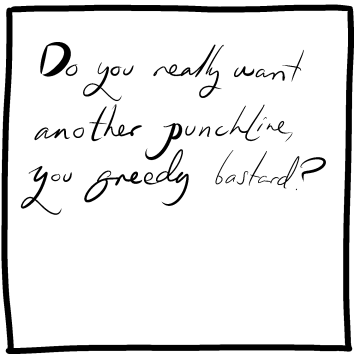 Right now I figure I'll do two updates per day. One in the morning and one at night. So, if you guys want, just check around 10AM and 10PM Pacific time to get the latest idiocy.

Speaking of which, so did Reva. I won't mention by name the comic that won for Best Use of the Infinite Canvas, but I will put forth that the experience of reading it isn't significantly different from reading Blondie while rotating the newspaper 360 degrees in between panels. Synch is the only comic I've ever seen that really makes use of the way the Internet works. Visually the Internet doesn't offer much of anything more than TV or newspapers. Yet, due in large part to Scott McCloud, visual things have thusfar been the main focus of attempts to reinvent comics by way of the Internet. The real reinvention isn't about drawing incredibly wide/tall comics or doing nifty crap with flash - it's about making use of the unique organization, display, and distribution abilities of computers and the Internet. In the case of Synch, this is the use of a sort of visual hypertexting.

I could blog a lot about San Diego, but most of it has probably already been said in bigger venues. Suffice it to say it was a truly remarkable experience to meet the friendly faces behind a lot of my favorite comics. Scott seemed to be having the most fun. However, (sorry Liz), R Stevens was clearly the hottest person present aside from the guy from Beastmaster III and the thiry-five year old man hailed as the "Yu-Gi-Oh Master" whose job consisted largely of trouncing twenty-five year olds at a game enjoyed mainly by fifteen year olds which was designed for five year olds.

I wish I'd gotten to hang out with people more, but I seemed to be continually sidetracked, and was, in any case, EXHAUSTED by the end of each day. However, much love to the people from Dayfree who spent some time with me, particularly the young gentleman from Combustible Orange whose name I neglected to learn.

I'm back in the saddle, baby. Updates will be regular once again, and I'd advise everyone to check back now and again during the day as I'll be attempting to double up for about a week in order to make up for all the missed updates during my travels.