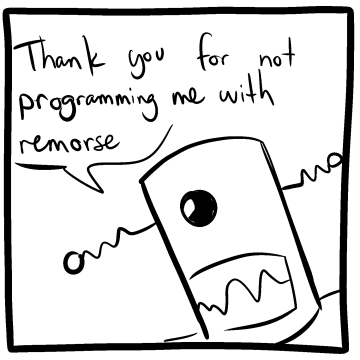 Programming joke! Now, where are all my new readers?

2008-03-13
Hey guys. Just to let you know, there was a SECRET double update yesterday. I did a comic with a punchline involving AIDS recently, but decided to take it down. In addition to being perhaps a bit over the line even for me, it's probably not ideal for publishing reasons. I'm still wrestling with this choice, but for now it seems to be the right one.

And the bonus for you guys is an extra comic if you click back to that day.

I'm working on a votey comic right at this moment, so if you check back in an hour or so, it should be up.

Also, some crazy people are paying way too much for the current PW ads. So please make them feel like it was worth it by giving a click.

Ah, middle school. Anyone have any embarrassing middle school tales? I once accidentally used the girls' bathroom. Unfortunately, no girls were present. Maybe next time...

PS: Thanks to all the people who upped the reddit link to SMBC that was floating around yesterday. Drove a ton of traffic!

PPS: For people who didn't get yesterday's - there's a slogan that apartments will sometimes use that goes "If you lived here, you'd be home by now." Apparently it wasn't as ubiquitous as I thought.