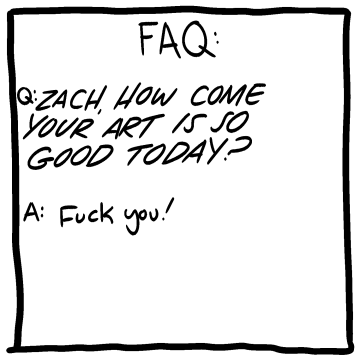 True story - long ago when I was on the dating market, every time I talked to a grad student who found out I was a cartoonist, she'd say "ARE YOU JORGE CHAM?" More and more, I regret that I always said no.

Anyway, you should check out his book!

This book was recommended to me by a friend, and I’ll recommend it to you. There’s a lot here, so I won’t try to unpack it all. But, the basic core here is that it’s a book about moral psychology, or what you might call an empirical look at human morality.

The author argues that different cultures and groups (he puts especial focus on liberals vs. conservatives vs. libertarians) often disagree because their moral frameworks emphasize different aspects of shared moral values. This is interesting on its own, but Haidt adds an argument about how and why humans tend to view their personal moral value system as the only true one, which results in uncooperative “righteous” behavior. This is an interesting approach, especially in that it turns what most people would call “outrage” into “righteousness” which reframes it in a way that’s interesting to consider.

I’m not sure I’m down for all of it. In particular, there’s an argument about group selection that (like a lot of arguments about multi-level selection theory) seems to me to be semantic to a large degree, and perhaps to overplay the idea that group selection is some sort of scientific heresy. At least in my experience talking to biologists, the general view has been “there’s a version of group selection that, if defined the right way, we all accept.” But, maybe that’s my limited view as someone who wasn’t a biologist in the 70s, and who hasn’t ever picked a fight with Richard Dawkins. But, Haidt does a great job of offering a pathway to understanding each other in an increasingly polarized political climate. That, and all the interesting facts and arguments, make this a very enjoyable read.

I really enjoyed this comic book. Before I get into it, let me just say by the way that, as a cartoonist, I appreciate Neufeld’s dedication to drawing gorgeous and detailed backgrounds. There’s no cheating in this book, from an artistic perspective. This is all the more impressive given that the book is really a piece of reporting. It’s not attempting to be literary or exactly beautiful. Rather, it’s a pretty high fidelity retelling of the stories related by seven people of different backgrounds who survived Hurricane Katrina. That said, it’s not without great moments. For instance, there’s a part where the characters trapped in New Orleans find that the only people maintaining order and keeping thirsty people alive are the “thugs” who are willing to rob local stores to supply water.

The almost science fictional seeming militarization of the city is also very striking. One scene describes a man in a boat coming to a hospital to ask for help for his baby. He is turned away by guards with guns, although people on the upper floors of the hospital throw food and water to him before he goes on his way. I usually have a gripe about memoirs that present bare facts rather than trying to make sense of it all, but A.D. is really more of a report than a memoir, and on those terms it succeeds fabulously.

Till We Have Faces (Lewis)

In fairness, I only read two before I felt I’d had enough. But, there it is. The characters seemed ludicrously non-reactive to the extreme circumstances they faced, and the plot (as I recall) seemed to be a grab-bag of whimsy that more or less went nowhere as you waited for Aslan to show up. In fairness, I was not raised as a Christian, and I was only later told about the apparently blatant use of Christian imagery. So, perhaps part of my confusion about the books’ popularity came from, you know, entirely missing the point. Then again, perhaps this is why the old religions (it seems to me) are so much more adept at creating compelling epics. What meaning is there in Gilgamesh’s questing or Odysseus’ journey if there is a single omniscient abstraction orchestrating the whole thing?

Till We Have Faces still carries plenty of Christian imagery. In fact, the main character is torn between her local pagan religion, with its funny smells and magical irrationalities, and the skeptical atheistic tradition embodied by a Greek advisor to her family. Of course, she ends up more drawn to something vaguely related to Lewis’ vision of Christianity. Fine.

Now, set that all aside, and realize that this is a wonderful book. The main character, an old woman telling her own history, is absolutely fantastically crafted. There is a richness of understanding in this book, which Lewis contemplated his whole life only to write in his old age. Everywhere is profundity - in the politics of the world, in the various characters, in the way passing time twists understanding of previous events. I, who am not generally a fan of CS Lewis, adored this book. Considering its relative shortness, the emotional depth is remarkable.