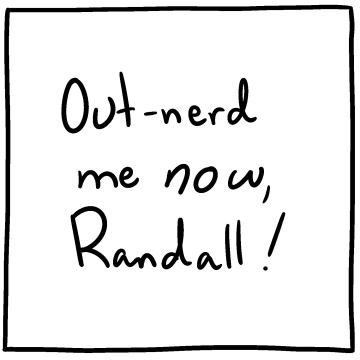 Drawn with great humility and thanks to one of my favorite people. Scott did all of the real work, and I threw in some dirty jokes. So, hey, a pretty good deal all around.

I’m still on this McWhorter kick. This one was good, but not as good as some of the others. It’s about English and its interactions with other languages. The bulk of the book is about the idea that repeated conquests of English speakers resulted in English being particularly simplified in terms of its grammar, especially compared to related languages. There is also a large section on a proposed link between Celtic and English grammar, and even a section positing links between German and Hebrew. The latter idea is based on the work of Theo Vennemann, whose ideas are (as far as I could tell from google and wikipedia) found to be interesting but probably wrong. Because it’s McWhorter, there’s also a long lament about the popular usage of the Sapir-Whorf hypothesis. You get the feeling that his later book “The Language Hoax” was a great unburdening of linguistic angst.

This is yet another book about the idea that we are in a period of stagnation in terms of economic improvement for the average western person. Although it was enjoyable, as a book it didn’t make a strong argument. Most of the book is (admittedly fascinating) historical tidbits about technological development, mostly in the 20th century leading up to the 1970s. Levinson’s perspective ultimately agrees with that of Robert Gordon and Tyler Cowen, at least to the extent that they all blame the nature of post-1970s technology for the failure to improve the average person’s life. And, like, the others, Levinson has hope that a few technologies on deck (e.g. self-driving cars) will reverse that trend.

All the Gallant Men (Stratton, Gire)

A great memoir and oral history about a man who was on the USS Arizona when the attack at Pearl Harbor happened. As these things go, it’s not necessarily a standout, but I always appreciate memoirs that give you a real sense of the person. Stratton talks about particular people and how he felt about them, as well as how he felt about certain political and social occurrences that followed the war. For instance, he talks about how he generally doesn’t like these attempts to get American and Japanese WWII vets together to make nice. To him, the memories are too horrific. Given what he saw on that day, and the year it took his body to recover, it’s hard to blame him.